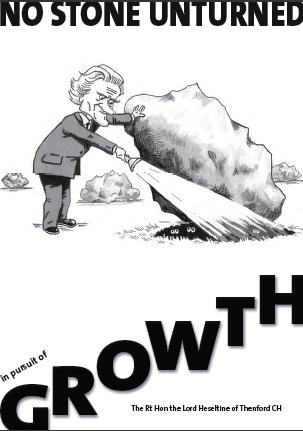 The new emerging governance of City Regions in the UK is not only establishing, it has to embrace new roles, opportunities and responsibilities in response to the expectations of the European Commission and the needs of the UK economy. Unfortunately, there remains little political support.

‘The Heseltine Review, No Stone Unturned : in pursuit of growth’ was published 8 months ago next week. It was, largely supported by the UK’s cities as an opportunity to strengthen local economic leadership through city regions. Whilst Heseltine continues to promote its messages, the divisions in policy within Whitehall continue to undermine what is, ostensibly, a sound and rational argument for devolution.

Within the text of the review are some significant proposals supported by examples from City Region Local Enterprise Partnerships, such as Cumbria and the Isles of Scilly, illustrating how they might show leadership on local energy generation and low carbon growth.

These LEPs, and others in the UK, are developing their local growth plans alongside their investment proposals for the EU funding programme 2014-2020. They’re asked to ringfence up to 20% of the total of their ERDF funding towards low carbon activities over that 7 year period. Imagine how much more effective that could be if the proposals outlined in the Heseltine Review were enacted and the funding identified in the ‘single pot’ and the European funds could be used as a catalyst for growth instead of a sticking plaster on collapsed economies.

Energy policy has become central to recent poltical exchanges in Whitehall as wholesale energy prices rise, profits and payrises for the ‘big 6’ appear to be unfair and out of kilter with the mood of the nation. And whilst both the Conservative Party and the Labour Party have offered proposals to control/intervene in the market there has been little consideration of the devolution of energy to cities, their city regions and their people at a time when there is an appetite (amongst the Core Cities) and proposals for such an approach.

In the past week two large LEPs with a track record in this field have made very clear statements on their role to boost low carbon activity, create jobs, reduce emissions, increase exports of low carbon goods and services and deliver the kind of proposals Heseltine would have wanted to see.

The Humber LEP spoke with great clarity at the Renewables UK conference, outlining how it brings together Hull, East Riding, North Lincolnshire and North East Lincolnshire – together with the Humber LEP to communicate the Humber’s strong offshore-wind and renewables offer to businesses who could invest in the area. With significant investment in the ‘Green Port’ model, the Humber has the opportunity to be the gateway for the development, manufacture and transport of large scale wind turbines.

Both these LEPs should be commended for their vision, commitment and understanding of the importance of this agenda and the opportunity it provides to solve local challenges (fuel poverty, health, unemployment, carbon reduction) with local opportunities to create new global markets which will create jobs, boost GVA and improve the health and wellbeing of their citizens as a result.

But LEPs were never set up to have a socio-environmental responsibility. Their focus has always been on the economic grounds for investment and until such time that LEPs and their emerging city region governance recognise that, it will fail to develop truly sustainable plans.

Over the next few weeks LEPs will digest the feedback they have received from the Government on their (more rounded) EU funding proposals. It will, no doubt, propose greater emphasis on sustainable development and the opportunities for low carbon investment. If (and it is an ‘if’) the proposals Michael Heseltine laid out in his report 8 months ago were enacted, it is likely this would happen much quicker.